HISTORY of the AOA 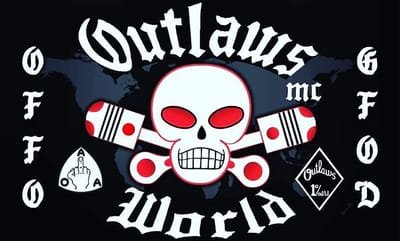 "History
Outlaws MC (est 1935) 84 years strong and tradition
1935
The McCook Outlaws Motorcycle Club is established out of Matilda`s Bar on old Route 66 in McCook, Illinois outside Chicago.
1946
Although the Club stayed together during World War II, like most organizations at that time, the Clubs activities were limited. In May of 1946 the first major post war motorcycle event in the midwest was held at Soldier Field, in Chicago.
1950
From its` original charter members of 1935 the Club grew in size, with members from all over the Chicago area. The Club decided to change its` name from The McCook Outlaws to The Chicago Outlaws and moved out of McCook, re-establishing itself in Chicago. It was also decided to completely change the Club logo. A small skull replaced a winged motorcycle and old english style letters were adopted. This design was embroidered on a black shirt and hand painted on leather jackets.
1954
The Crossed Pistons to the original small skull. This design was embroidered on a black western style shirt with white piping.
The movie “The Wild One” with Marlon Brando influenced this backpatch. …more
1959
The Skull and Crossed Pistons were redesigned, making them much larger with more detail.
AMA Logo in the 60′s
AOA Logo (…the answer)
1960
The A.M.A. American Motorcycle Association, that supervises all official races in the USA – banned the word Outlaws from all race clothing. There for all racing club members wore the sign OMC on their outfits till 1963.
1963
The Outlaws became an official member of the 1%er Brotherhood of Clubs, making it the first true 1%er Club east of the Mississippi.
1964
On the 4th of July, the “Gipsy Outlaws” from Milwaukee join the club. During the Springfield Motorraces in august they are followed by the “Gypsy Outlaws” from Loisville. (they had no former contacts at that time with the Milwaukee Club) The “Outlaw Nation” was founded with Chicago as Mother Chapter.
1965
On the 1st of January 1965, the AOA – American Outlaws Association – was born. The backpatch of the club, skull and crossed pistons, is named “Charlie”
1969
“God forgives, Outlaws don’t” becomes the club’s motto
1967
In July 1967 the Outlaws National President and a few more members came down from Chicago, and we were the first chapter sanctioned in Florida.
1977
Foundation of the first chapter outside the USA in Canada.
The “Satan’s Choice” becomes Outlaws MC.
1984
For the first time a member not belonging to the Mother chapter
becomes “National President”
1989
The abbreviation “MC” is added to the backpatch
1993
France becomes the first european chapter.
1994
Foundation of the overseas chapter by the “Australian Outlaws” on the 5th continent. Also the “MC 44″ from France becomes the chapter. On their backpatch “Europe” is added.
1995
As the chicago chapter is growing, it’s split into three groups: Mother Chapter (Southside), Westside and Northside.
Norway becomes the second european chapter.
1999
The belgian “Outlaws MC”, that already exists independently for 25 years, becomes member of the AOA – at that moment, it is the only chapter in Europe.
2000
The english and welsh “Outlaws MC”, till then an independent MC, join the AOA.
Later that year, Norway is added again as the first scandinavian chapter.
2001
In many countries in Europe starts new chapters. Ireland and Jersey.
In Germany the “Ghost Riders MC joins the AOA – followed by the first asian
chapter in Thailand and a second scandinavian chapter in Sweden.
2002
In Germany starts the first offical Support MC (Black Pistons MC) of the AOA Nation.
Other countrys, USA, Canada, Great Britain, Poland and Norway follow…)
In Italy and Poland starts new chapter of the AOA
2003
The Outlaws MC is represented in 19 states in the USA.
The french “MC Drome” join the AOA
2004
End of 2004 – the A.O.A. starts the first prospective chapter in Russia.
2005
Biking & Brotherhood since 1935.
The Outlaws MC World celebrate 2005 the 70th Anniversary as a
Motorcycle Club and the 40th Anniversary of the AOA
(American Outlaws Association)
Charlie is landed in Russia.
Russia get the fullmember Status in June 2005.
2006
End of 2006 – the A.O.A. starts the first chapter in Japan.
2007
Asia is growing! In march 2007 starts a chapter in Philippines
2008
The A.O.A. starts a chapter in Spain
2009
The A.O.A. starts chapter in Serbia and Austria
2010
The A.O.A. starts chapter in Switzerland and Czechia.
2011
The AOA starts chapter in Montenegro.
2014
The AOA starts in New Zealand.
2016,
The AOA starts in West Balkan.
2017,
The AOA starts in Lithuania, Finland and Hong Kong.
2019,
The AOA starts Prospective chapters in Brazil and Holland..
2020,
The AOA starts in Brazil..
The AOA starts Prospective chapters Chile..
.
.
The Outlaws today exist as one of the largest Motorcycle Clubs worldwide."